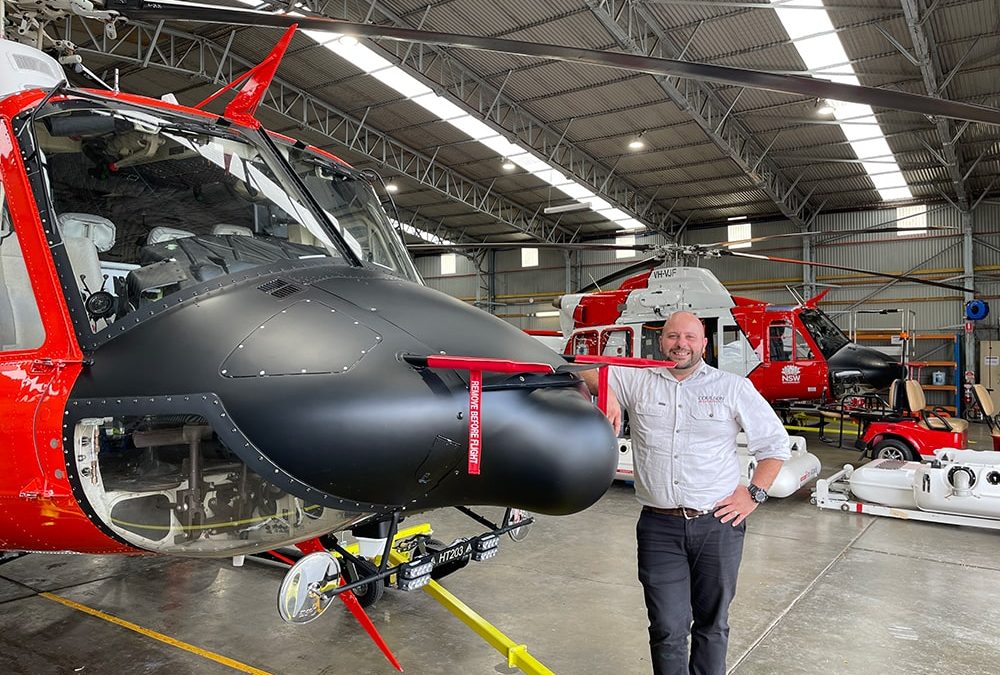 Coulson Aviation Australia’s Responsible Manager for Rotary Wing Maintenance, Kevin, refers to Bell 412 helicopters as the “Swiss army knife of the sky” because of their versatility.

Two of the New South Wales Rural Fire Service owned helicopters are based at the Coulson Aviation Australia Bankstown base and work across the State, with the ability to undertake tasks including:

Kevin has worked as an engineer on all types of rotary aircraft across Australia and into Papua New Guinea, but the Bell helicopters are his favorite. He says they are well suited for the variety of tasks.

After numerous operations supporting the work of NSW RFS through the recent flood response, the two Bell 412 helicopters will undergo winter maintenance in the next month. They will be disassembled for all scheduled maintenance checks, modifications, snag fixes, and general maintenance procedures, including full logbook auditing and sign offs by certified engineers.

Kevin said the rotary wing engineering team continues to be focused on configuring the Bell 412 for the tasks required by RFS – ensuring the helicopters are safely operational for the pilots and aircrew who support the community during emergencies.

Before coming to Coulson to lead the Bell 412 engineering efforts, Kevin was contracted to a wide variety of organisations in the industry. His time working for a mining operation in Papua New Guinea provided a number of challenges. One example was when Kevin was part of an international search party that found a missing plane in 2009.

More recently, he worked through the 2019/2020 bushfire season supporting the firefighting efforts as an engineer.  He described the undertaking as, “a massive collegial effort between the aviation industry and emergency services”.

The ability to work alongside passionate aviators and to support up and coming engineers through career progression opportunities is part of the appeal of his current role.