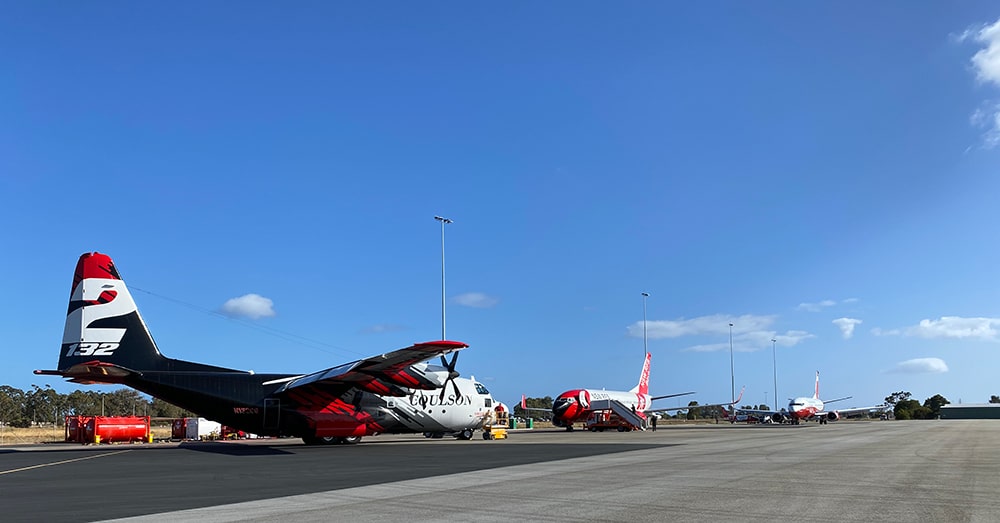 In something that has been rarely seen in aerial firefighting in Australia, three large air tankers have been working in Western Australia (WA) together as part of the aerial effort to support emergency services and protect communities under threat of fire.

Under the direction of WA’s Department of Fire and Emergency Services (DFES) two 737 and a C-130 were working closely together laying lines of fire retardant that made a real difference to minimising the danger and impact to communities under threat of fire.

737 FIRELINER “Marie Bashir” and Citation bird-dog are owned by New South Wales Rural Fire Service and operated by Coulson Aviation Australia. NSW has a second Coulson-owned 737 FIRELINER on contract, and the RFS provided both aircraft to WA when they were most needed.

The two FIRELINER’s were working side by side with Coulson-owned C-130 Ty, which is based in Western Australia for DFES for the summer.

Coulson Aviation Australia CEO Chris Smallhorn said it had been impressive to see three Large Air Tankers operating so successfully together as part of the aerial firefighting support in WA.

“The teams behind the Large Air Tankers and the Cessna Citation bird-dog are enormously proud to have been supporting and serving firefighters and emergency services who are doing an amazing job,” he said

“It is devastating to see the homes lost and lives impacted, but the firefighters and emergency services have been working tirelessly with community members in these most recent fires near Perth, as well as across the fire season in Western Australia.”

Read more here for the work the large air tankers have been doing.