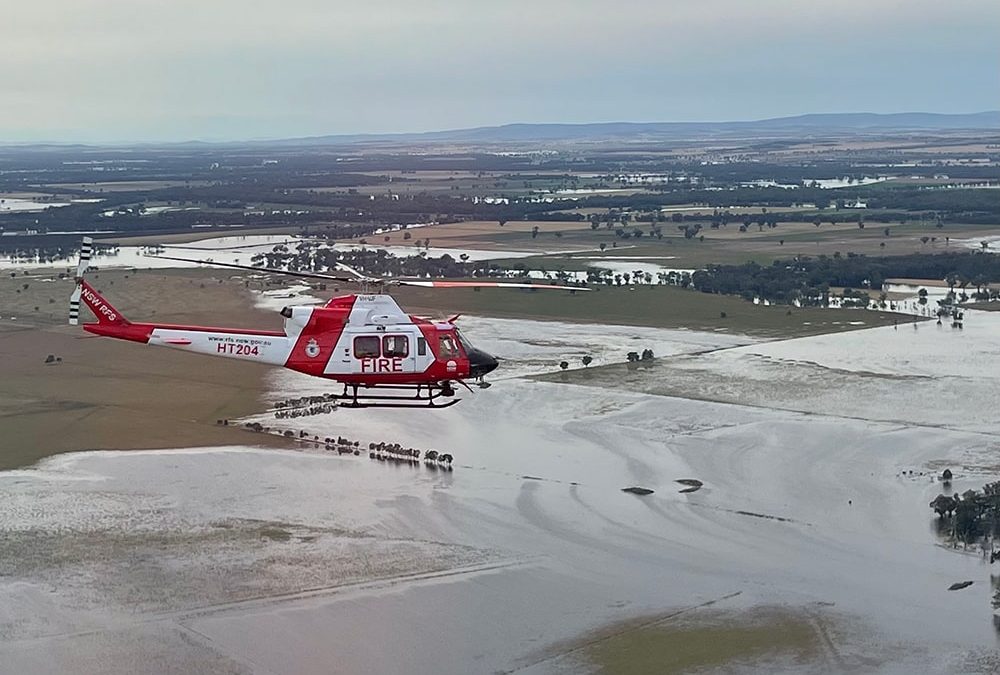 At the request of the New South Wales SES, the NSW Rural Fire Service Bell 412 helicopters, operated by the Coulson Aviation Australia team, have been pre-positioned throughout regional NSW to support the flood response.

Over the past few weeks, the team on helicopter 203 were working in Dubbo undertaking training and surveillance over the Macquarie River, upstream from Wellington through Lake Burrnedong and upstream again to Bathurst.

Both helicopter 203 and 204 were also located in Forbes. It has been “all hands on deck” as emergency services and the community faced the flood waters.

Through tasking by RFS in response to SES, team members have been assisting with flood rescues, including of a motorist cut off by flood water that they spotted while out assessing the floodwaters in the area.

NSW SES also requested help to fly teachers in and out of the Bedgerabong Public School, west of Forbes, when the school was cut off.

Another of the tasks the team have undertaken include heavy lifting, using the aircraft to long line in sandbags to a property to help shore up a levy alongside fire and emergency services personnel.

The RFS-owned and Coulson operated Cessna Citation has also been transporting emergency services.

The support provided to communities at risk of flooding is a multi-agency response.

NSW Rural Fire Service brigades and aircraft have been assisting at the request of NSW SES. Coulson Aviation Australia team members are deployed in the region supporting the operation of the RFS-owned aircraft and are happy to be able to help.

Both RFS-owned machines and the teams have been out for more than two weeks on deployment where needed around the region, including Forbes, Tamworth and Wagga Wagga.