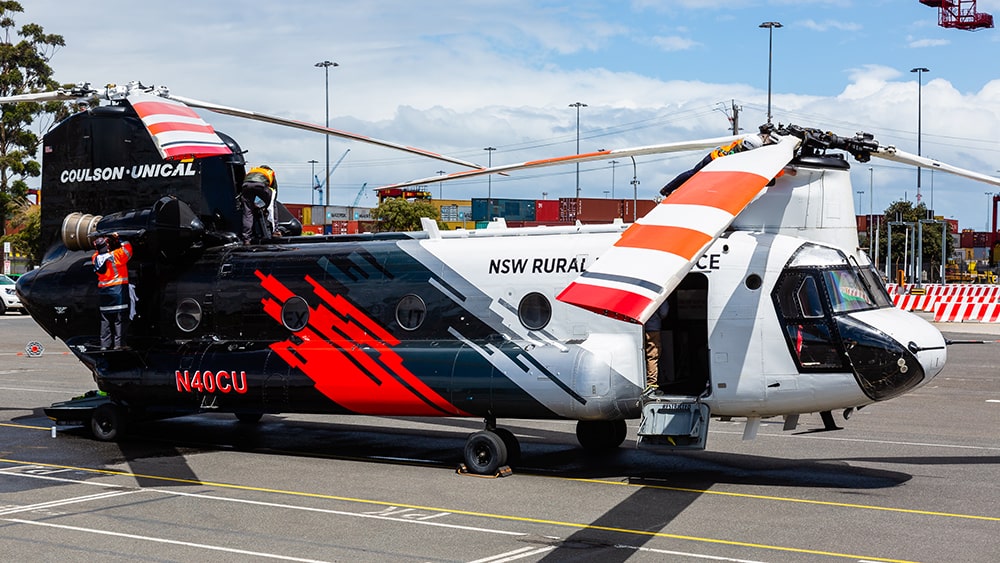 The first of two Coulson Aviation Chinook helicopters on contract in Australia this season has arrived. It will be deployed in New South Wales.

The CH-47, tail registration N40CU, arrived by cargo ship into the Port of Melbourne and flew from the docks to Essendon Airport for refueling before making its way to Sydney to begin its contract with New South Wales Rural Fire Service.

Arriving at the Port of Melbourne

A lot of work goes on behind the scenes to get ready for the high-volume seasonal aircraft that come to Australia each summer season.

As part of the Australian and Coulson Aviation contracts in place, Coulson will be providing a Sikorsky S-61 “Large Air Tanker”, and for the first time two CH-47 Chinook Helitankers.

Ground Crew Staff on the Job

The crew for the first Chinook on contract (mechanics, engineers, and pilots) arrived in the country earlier than the Helitanker as part of the preparation required to get it off the cargo ship on arrival, and to ensure full and safe serviceability for the Australian summer.

The other contracted Coulson aircraft start work later in the year. More on that to come.