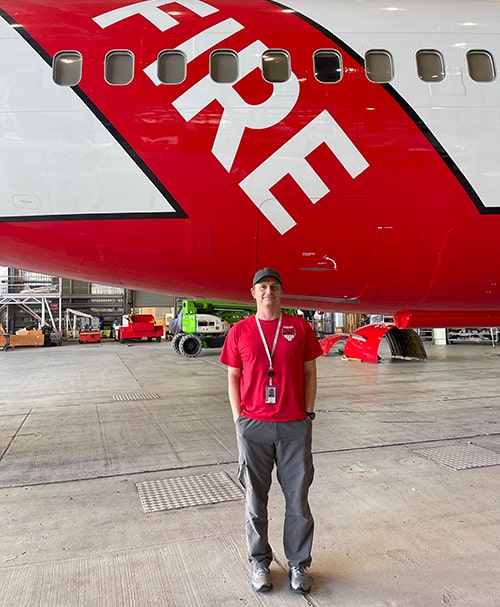 When the Coulson 737 FIRELINER™ flew over Mark Davies’ Blue Mountains home during the tragic 2019/20 fires and he learned Coulson Aviation Australia would be operating aircraft in Sydney on behalf of the NSW RFS, he knew he wanted to be a part of it.

“RFS are pioneering the use of locally owned large air tankers and is essentially creating a new industry within an industry. There really is nothing quite like it anywhere else in Australia,” Mark said.

“The scope of the work we do here is not like any other work you do. It’s unique because of the firefighting equipment required to undertake missions, and we are utilising a progressive maintenance program that includes undertaking deeper maintenance each winter to ensure maximum aircraft availability during fire season.”

“These aircraft are essentially fire engines waiting for the bell to go off, and it’s our job to ensure they are fit for flight.”

With 30 years in the commercial aviation industry, and virtually raised on the 737,  he sees it as a great workhorse and a versatile aircraft. To him, it made sense when Coulson Aviation undertook the world’s first major modifications converting a Boeing 737 to what is now known as a Coulson Aviation FIRELINER™.

The 737 FIRELINER™ Marie Bashir alongside two Cessna Citations and two Bell 412 helicopters are owned by RFS NSW and operated by Coulson Aviation Australia.

He works closely with the Canadian-based team members of Coulson Aviation in the Continuing Airworthiness Program. He said it’s a good example of using the Coulson Group’s international experience locally, as well as the maintenance team members at Richmond and Bankstown. Winter maintenance on the Marie Bashir is also currently underway.

Understanding the demand for fixed wing engineers in the aviation industry, Mark is  keen to support an apprenticeship program within the organisation.

“As soon as operations are bedded in, we will be investigating the introduction of an Apprenticeship program. With a combination of rotary, small jet, and large jet exposure, we have a terrific learning environment for developing aircraft maintenance professionals,” he said.