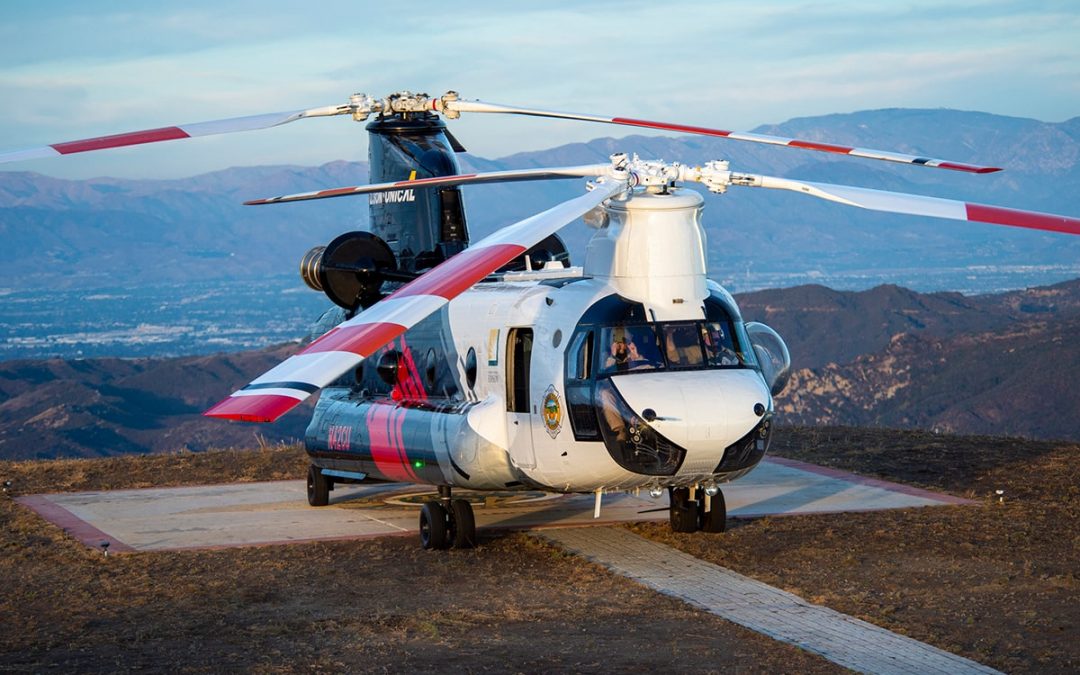 Two of the largest firebombing helicopters in the world, the Coulson Aviation CH-47D Chinooks will be in Australia for the first time this summer due to new aircraft contracting arrangements for Australia. AFAC, through the National Aerial Firefighting Centre (NAFC), has confirmed Australia’s seasonal aircraft contracts for the next three years on behalf of the States and Territories.

Coulson Aviation has been awarded contracts to provide a Chinook and a Sikorsky S-61 Helitanker to Victoria, as well as a Large Air Tanker, and a Chinook to New South Wales.

“Coulson is pleased to have been selected as the supplier for both the largest capacity airtankers and helicopters in Australia,” Britton Coulson, President and CEO of Coulson Aviation Australia said.

The Chinooks will be the largest volume firefighting helicopters in Australia, with the capacity to carry up to 11,000 Litres of water or retardant. Both are capable of night fire suppression Night Vision Goggle (NVG) operations.

“Coulson is the only non-government entity to utilize Type 1 Helicopters to fight fire at night using NVG’s, and we know exactly what these Helitankers can do, and the difference they make,” Britt said.

He further explained, “The CH-47D Helitankers, with Coulson’s own RADS-L tanking system installed, have the highest payload, fly at the fastest speed, and are the only high volume helicopters that are dropping at night. Coulson’s flight and maintenance crews are some of the most experienced in the industry and all share the same passion as we do for providing the best support to the ground firefighters.”

Two Coulson Chinooks, with a Sikorsky-S61 and a Sikorsky-S76, are in California as part of the Quick Reaction Force (QRF) program, which is a 24-7 cooperative operational concept between three fire jurisdictions of Orange, Los Angeles and Ventura Counties supported by Southern California Edison.

“Along with the proven aerial firefighting capabilities of the S-61 helicopter and our Large Airtankers which have successfully operated in Australia for many years, we’re confident these aircraft are a good choice to help to protect communities and firefighters if and when they’re needed.” Britton added.

Coulson Aviation Australia, the Australian arm of the global company, operates on behalf of the NSW RFS its 737 Large Air Tanker, two Citations and two Bell 412 helicopters in Sydney. It also supports the seasonal surge aircraft Coulson Aviation brings into the country every Australian summer.

“The addition of the CH-47D’s to Coulson’s existing Australian fleet of B-737’s, C-130’s, S-61’s, B-412’s, and Citation aircraft further solidifies Coulson’s commitment and long-standing relationship with government, agencies and the community to continue the battle against fire, 24/7.”

In Australia, NAFC contracts approximately 150 aircraft on behalf of state and territory governments. This fleet is supplemented by additional state owned and state contracted aircraft hired to meet peak demand across Australia.