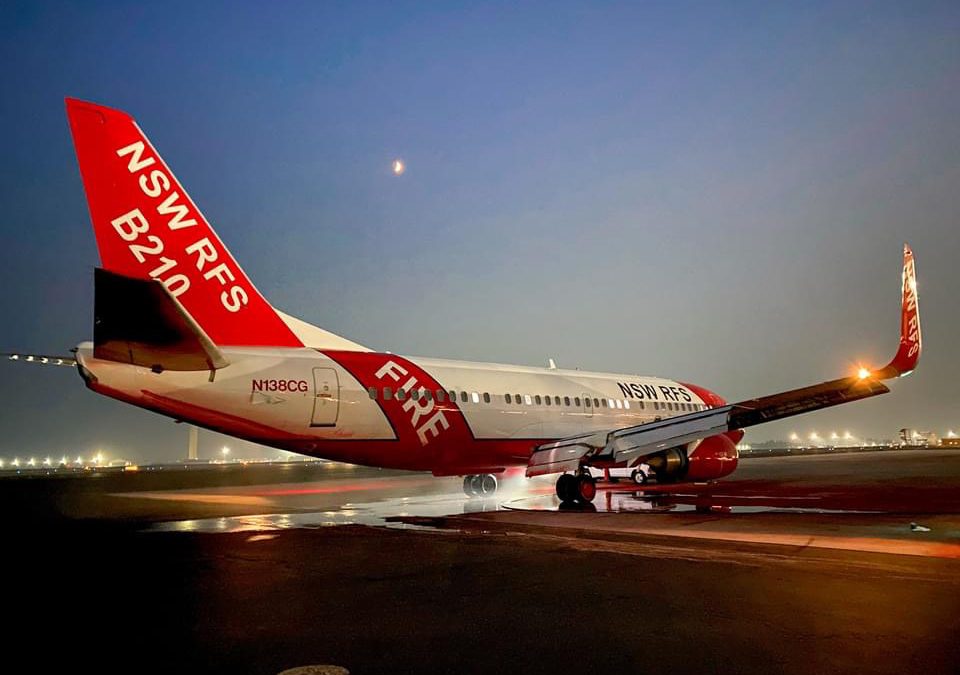 Coulson Aviation Australia Licensed Engineers Paul Collins and Jono Young are working in the USA to support the efforts of Australian based 737 aerial bomber the Marie Bashir fighting fires alongside a range of American fire services.

They are in a team of four engineers supporting the aircraft (Bomber 210) which is owned by the New South Wales Rural Fire Service and operated by Coulson Aviation Australia.

The US Forestry Service, given their tough fire season, sought assistance through existing arrangements with Australia. The NSW RFS was able to answer this call, sending their 737 on a 45 day deployment supported by Coulson Aviation Australia team members.

The engineering team are a vital cog in the wheel that keeps the 737 in shape, preparing the aircraft each morning and maintaining it at night.

Paul said a typical day consisted of either waiting for dispatch orders, keeping a keen eye on the machine, or turning the aircraft around in 15 mins with fuel and retardant refills.

The team really earned their money on the fire days as they could sometimes work well into the night, he said.

“Working on the road with no idea of where you’re going to end up each night has its own set of challenges. It’s a logistical work of art.

“We essentially pack up our hotel each morning preparing to be sent somewhere new each day. You either travel with the machine or take the truck and trailer,” Paul said.

“Luckily any challenges are completely offset by the genuine friendliness and downright politeness of everyone you meet. They absolutely appreciate the work we do and the efforts of our people.”

Paul said the work the teams have been undertaking in the USA has been vital to the fire efforts as California has experienced so many large, concerning fires.

“It really puts in to perspective what this is all about. You can’t help but feel proud of what we are able to contribute,” he said.

“One of the pilots said every time it gets tough, they think of the fire fighters on the ground and the people in the towns. They know a lot of them personally.”